On September 15, 2020, Dan Martin (a professor at Central Washington University) ironically tweeted that “Academia is reading a book & then forgetting that book ever existed.  Regardless of what prompted this tweet, I’m guessing that most CRWP blog readers (myself included) would tend to disagree.  Nevertheless, I have recently been writing a reading memoir, which reminded me of all my forgotten books. 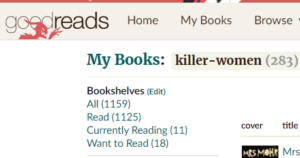 To jar my memory I’ve been constructing a list of every book I’ve ever read using the Goodreads platform. After two months of compiling books, I stand at 1125 books read and 90% forgotten.

While a book’s fate may be bleak, as Dan Martin’s tweet implies, I see forgotten books as a place for joyful or insightful re-discovery and the Goodreads platform has afforded me this place. My adult leisure reading of primarily mysteries and thrillers with a splash of science fiction/fantasy has a now vividly-recalled childhood base with every Nancy Drew, Hardy Boys, and Trixie Belden book read with a passion. Likewise, I see my adult interest in gaming has its foundations in childhood science fiction fantasy books, such as the Witch Mountain series, Tuck Everlasting, Gulliver’s Travels, and Rats of NIMH.

Interestingly, the Goodreads list has forced me to confront eight boxes that have been sitting in the garage for nineteen years. I had thought these boxes contained books from when I taught in Japan. In truth, I had avoided the boxes for nearly two decades because a few (filled not with books but with my grandparents’ vinyl records from the 1940s and 1950s) had been stolen during a 2001 move from Arizona to Michigan. I was in such grief, no longer having my grandparents’ beloved WWII-era keepsakes (along with some of my own vinyl records from the 1970s and 80s), that I pretended the remaining boxes simply did not exist.

However, with my Goodreads list showing a significant hole for my Japan years, I could no longer pretend. Oh, what unexpected, joyful discoveries! To date, I’ve only opened two of the boxes, which turned out not to be the Japan years’ books; instead, I found books I’d read during my childhood that belonged to my mother,  grandparents, grand-uncle, and great-grandparents! 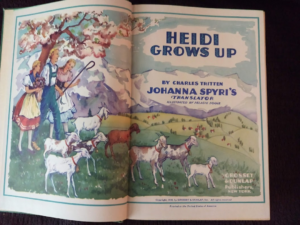 Heidi Grows Up (1938) by Johanna Spyri, translated by Charles Tritten.

I even discovered one of my most treasured lost-now-found books with the recollection of its series being read to me and later reading them myself. 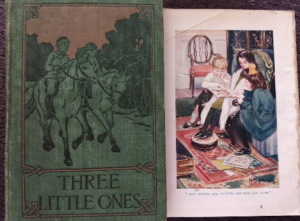 Three Little Ones Their Haps and Mishaps (1889) by Cora Langton. Inside cover illustration caption: “They showed her pictures and told her tales”

Other books that caught my eye as I continued to rummage through the two boxes:

(Read one of them yourself via the links at openlibrary or Project Gutenberg!)

I have snippets of memories regarding three other books. 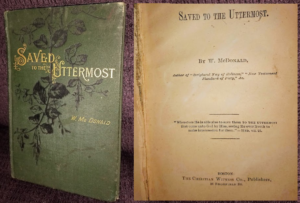 Saved to the Uttermost (1885) owned by Rosella Camp Jenkins.

First, I was scolded for touching great-grandmother Rosella’s devotional. 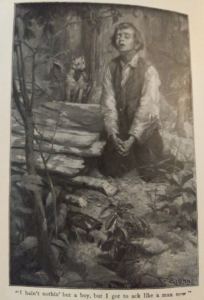 Second, Grandmother would comment whenever she saw me reading The Little Shepherd of Kingdom Come that it was grand-uncle Jay’s favorite book and remind me to stay away from the train tracks. I didn’t understand the connection between the two statements until I was in college. 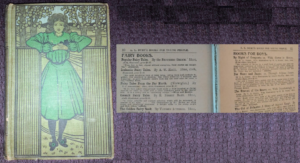 Cover and back of the book advertisements: A Girl of To-day (1900) owned by Florence Thompson Jenkins.

Finally, Grandmother thought that reading A Girl of To-Day to me might help me acquire more manners and less tomboy behavior.

Though I fondly remembered reading these books when young, I was far more interested as an adult to read the handwritten inscriptions (some of them more than 100 years old) in the books. My more careful scrutiny of Longfellow’s Poems now noted two sets of handwriting, Mrs. Whitmore’s and my grandmother’s.  My grandmother received this on Christmas in 1909 when she was twelve. In 1972, she added details. 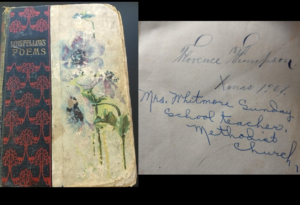 An edition of Longfellow’s Poems owned by Florence Thompson Jenkins.

The re-discovery of these forgotten books brought to mind and magnified an experience from last summer. At a young family member’s high school graduation, my sister-in-law kept saying: Jay’s family is a family of readers because we had books in hand when there was downtime.  My mother also always had a book nearby when she was alive, although she only cared for Danielle Steel and a few other romance writers.

My now-found books made me keenly aware that we are not just a family of readers as of today, but that we have been a family of readers for generations. Moreover, re-discovery of forgotten books not only benefits the finder, but also the people with whom the finder shares the book anew. I see this as I share with my nieces what I found in my garage, aware that I’m planting a seed of habit in them.

Lisa Nienkark is a professor of reading in the Integrated English department at Lansing Community College, where she currently teaches integrated reading and writing courses. She was fortunate/delighted to have the opportunity to participate in the CRWP 2020 Summer Institute on Remote Literacy Learning.

This entry was posted in Reflections and tagged Reading, reflections. Bookmark the permalink.