The auditorium in Anspach Hall was buzzing on the morning of Saturday, April 25th, as 30 excited young authors from area schools grabbed their pencils and notebooks to kick off the first annual Manuscript Day.  The event — co-hosted by the Chippewa River Writing Project (CRWP) and the student affiliate of the National Council of Teachers of English (NCTE) at Central Michigan University — was free for the elementary and middle school students in attendance.

Fellow third grader Hailee pulled out four new writer’s notebooks that she had brought with her “just in case,” and Paige was excited to write about Girl Scouts.

CRWP Director Troy Hicks kicked off the event with writing into the day inspired by the video, “Guide to Being Awesome,” from Kid President.  “Are you ready to write?” Hicks asked. “How are you going to be awesome today?” The young writers cheered in response. 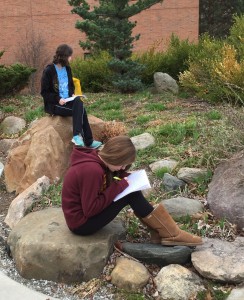 Young authors use their senses as they write outdoors near CMU’s greenhouse.

The elementary students attending Manuscript Day were scheduled for three different sessions, each led by a CRWP Teacher Consultant and CMU pre-service teachers.  Marcia Larkins, a 2011 CRWP TC and fifth grade teacher in Carson City, launched the writing marathon session by reminding students, “You can write about anything, anywhere, anytime. Just look around.”  Students were encouraged to find inspiration through their senses as they traveled around campus to write.  CMU pre-service teacher Ethan O’Brien, himself a songwriter and musician from Alpena, recommended that the marathon participants write without limitations. “Get the goop off your brain first…The good stuff will come even if it doesn’t come right away.”  Once outside, the students could use all of their senses in their writing. Blossoming tulips were personified in narratives; chirping birds became raptors on a deserted island; the smells of pine and cedar drifted into story.

Back inside Anspach Hall, CRWP 2013 Teacher Consultant Julie O’Brien — a third grade teacher from Sacred Heart Academy — began her session, “What a Character,” in the role of Southern Sophie the Starbuck’s Barista. Wearing a green Starbuck’s apron and assuming a southern drawl, she took imaginary coffee and hot chocolate orders from a group of giggling writers who, like their adult counterparts, knew their coffee shop options.  Then, stepping out of character, she asked the young authors what they knew about Sophie from this simple skit. Students realized they could say more about Sophie than they initially thought, which further led them to understand, as O’Brien put it, that “characters are more than skin deep.”

Jacob Leski, a CMU pre-service teacher from Okemos, invited fifth-grader Dean to join him in a skit about Ralph, the picky customer, in order to demonstrate the power of dialogue in establishing a character. Hands went up as more and more students asked to use sock puppets, wear princess dresses, try on jewelry, and act out improv scenes.  After each scene, the writers noticed how characters might be developed by descriptions, facial expressions, dialogue, situation, and, best of all, unbridled imagination. After the skits, students broke into pairs to write their own characters using all they had learned from improvising. 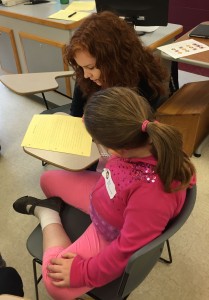 In the third session for elementary students, 2015 CRWP TC Kim Gorman — a sixth grade teacher at Grass Lake Middle School — invited students to revisit a fairy tale as mentor text and then to remake that familiar story into something very different.  CMU pre-service teacher Erica Howland from Leslie began by reading aloud two modern versions of “Little Red Riding Hood” and asking students to notice what was different. Then writers worked in pairs and small groups to remake “Goldilocks and the Three Bears,” “Little Red Riding Hood,” and “Hansel and Gretel.” Remaking the familiar is a powerful exercise for all writers, and these young authors rose to the task to reinvent characters, setting, and plot.  A read-around at the end revealed such new tales as “GoldieSchnoz and the Aliens,” “Lime and the Three Evil Clones of Doom,” “The Lost Sock Golden Toe,” and “Little Red Riding Phantom.”

While the elementary students moved between three sessions in the morning, the middle school students stayed in one spot — one of the three computer labs in Anspach Hall — in order to dive deeper into the crafts of writing and digital literacy.  CRWP Co-Director Jeremy Hyler introduced students to Mozilla’s X-Ray Goggles, a program that allows students to view the code on any web page and then “hack” the page to create their own version.  The writers decided to put a positive spin or insert their own voices into news stories of their choosing.  Hyler commented that writing is not just putting pen to paper anymore; students can participate in a global conversation using tools like Mozilla’s to remix and remake their writing and the writings of others.  These older students had a thing or two to teach the adults as well. CMU pre-service teacher Tyler Judd from Grosse Ile, looked over the shoulder of a middle school student as she showed him Google Gravity and Google Antigravity as tools for remixing the ordinary Google search into something visual and powerful. 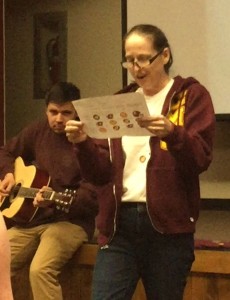 Manuscript Day culminated in a pizza party and read-around where students had the opportunity to mount the stage in the auditorium and share the work they had done during the morning.  Cheered on by their fellow writers, the students read poems, stories, fairy tales and first drafts of multi-part narratives, and Jeremy Hyler showed some of the hacked newspaper articles the middle school writers had created. Marcia Larkins and Ethan O’Brien even performed a rap they wrote during the writing marathon which ended with “Get out and write!”

The first annual Manuscript Day reminded authors, young and old alike, of the need to try fresh approaches and to throw off limitations as we strive to be more creative in our craft.  Students in grades three through eight can continue to be inspired by attending one of the CRWP’s writing camps at CMU this summer. A camp for elementary students (grade three through five) will be held in Anspach Hall, June 15th-18th.   Likewise, a summer camp for sixth through eighth graders will be held the same week.  For more information on both camps, please visit our “Youth” page on the CRWP website.

“The First Annual Manuscript Day” was a great success, said Elizabeth Brockman, English professor at CMU and co-director of the Chippewa River Writing Project, “with writers representing a number of area schools:  Mt. Pleasant Public Schools, Sacred Heart Academy, Farwell Middle School, and St. Bridget’s in Midland.  We hope everyone will return next year and invite a new friend or two.  Mark April 16, 2016 as the next Manuscript Day.”

The CRWP wishes to express its appreciation to the pre-service teachers from Central Michigan University’s student chapter of NCTE who volunteered their Saturday morning to work with students and share their love of writing.

Janet Neyer (@janetneyer) teaches English and psychology at Cadillac High School in Cadillac, Michigan.  She enjoys being a Teacher Consultant for the CRWP (Summer Institute 2013) and a recently authorized Google Education Trainer.  She blogs about teaching and technology at UpNorthLearning.

This work is licensed under a Creative Commons Attribution-NonCommercial 4.0 International License. 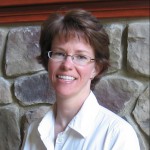