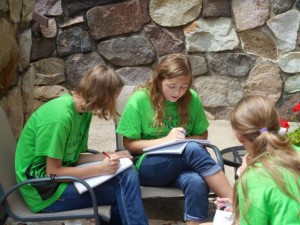 As we begin our fourth day of summer writing camp, there is already a sense of foreboding in the room – a little tension building with the anticipation of tomorrow’s impending goodbyes. Things are quiet as everyone focuses on their last piece of (new) writing, having browsed a collection of sites to find a prompt on their own today. After three days of the instructors encouraging them to write about specific topics and genres, the campers are ready to make some of their own decisions. They are learning what they like to write, which genres they work best in, and are beginning to see into the future and make plans for their pieces in the digital world, moving beyond the simplicity of words on paper. Tomorrow is a day filled with friends who will be tagging along to visit and share in the writing process, families coming out to witness and boast of their students’ portfolio presentations, and of course, those dreaded goodbyes. But right now is filled with writing, planning, thinking, revising, editing, and that squeeze to get everything finished on time.

When Kresta and I began this summer camp for young writers three years ago in the summer of 2011, we were excited to get started but unsure what we were getting into. Our goals were vague, we had no idea what to expect from our students, and only one of us had been through a National Writing Project Summer Institute with that model to guide the schedule and content. Luckily, thanks to a dynamic group of young writers, a more than generous amount of help from Montcalm Community College and Central Montcalm Public Schools, and our own abilities to adjust plans and think on our feet, the camp was a huge success. To our surprise the next year, due to a lack of all three lucky things listed above, the camp was not nearly the success it had been the first time. We took a summer off to breathe, to rethink. Both of us attended the 2013 Summer Institute with the CRWP, and the following year we planned for a youth writing camp once again.

And we are so glad we gave it another shot. This year, our goals were clear from the beginning, and we carefully planned out the daily agendas with more than enough to do, yet plenty of room for adjusting our plans. We welcomed eight campers and one “sherpa,” the same helper we had our first year of camp. With a quick show of hands to see who was excited about attending camp, we discovered that every camper, but one,  was eager to be there. She was the younger sister of one camper and friend of another, and not so reluctant after all, based on her eagerness to participate and share in everything we did. Everyone dug in with excitement from the beginning.

We instructors met several times before camp started to get all the plans organized, putting everything on Google Docs, a Symbaloo page, and a wiki so we could collaborate and work on our own whenever the need arose. We made sure to communicate with the college to be confident they were ready for us, and to clarify any needs we could anticipate.

Here is a simple breakdown of how we’ve run our camp:

Now it’s the final morning of camp, and we’re all still silently tapping away at our keyboards. Campers are sprawled all over the room, by now having chosen their favorite places to work comfortably, either with a small group or alone. Projects and portfolios are mostly finished, so we’ll spend the morning writing reflections and playing with a few more short prompts before friends and family come at noon for the big presentations. Our sherpa said goodbye to us this morning as she dropped off the camp’s promotion video. She had to head to orientation at Alma college which she will be attending in the fall. We had a giant group hug, an impromptu round of “For she’s a jolly good sherpa!” and wished her luck as she handed us her flash drive out in the parking lot.

Our only boy camper this week came up to me earlier this morning and quietly whispered, “I sure had a lot of fun this week, even though I’m the only boy here.” The twins who live in Tennessee are scheming about how to talk their parents into vacationing here again next year. Our youngest campers who had all the technology problems are finally “getting it” and grinning ear to ear as they create their beautiful wiki portfolios. Another camper has expressed her reflection through the voice of a character she wrote several episodes about all week, moving us to the edge of tears with her emotional goodbyes (from a rat!) Our oldest student is on her second year as a camper and is definitely buttering us up for the role of sherpa next year. And yet one more camper has shared aloud everything she’s written since the first two days when she wouldn’t speak aloud at all in front of our group. In her final reflection she writes that she can’t wait to bring a friend and come back next year.

Everything we did this week is published on our camp’s wiki page, here. 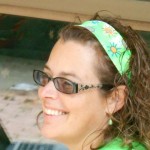 Shannon Powell teaches language arts, math, and drama at Central Montcalm Middle School in Stanton, Michigan. She attended the CRWP Summer Institute in 2009 and was a co-director of the 2013 Summer Institute. Since 2011, she has co-directed a youth writing camp at Montcalm Community College with another CRWP teacher consultant, Kresta Train.

This author does not have any more posts.